Liberals for breakfast: the men who would lead Quebec 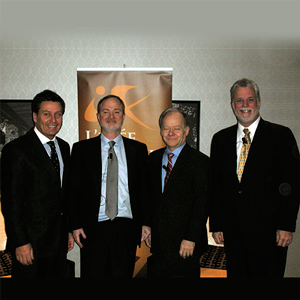 There are so many Liberal leadership races going on across the country that sometimes we miss a few. I woke up in an arctic Montreal this morning eager to check one of the larger contests off my list. The candidates to succeed Jean Charest as leader of the Quebec Liberal Party — the convention will be in Montreal on March 16-17 — were having a kind of sort of debate.

The venue was the Sheraton Centre hotel, where a group called Idée Fédérale wanted to gauge the candidates’ federalist credentials. Idée Fédérale is designed to be a place where Quebecers can talk about Canada in public, as though it were respectable; its most visible figures are La Presse editor André Pratte and international-relations scholar Jocelyn Coulon, who inaugurated a durable tradition when he became the first in a string of federal Liberals to lose to Tom Mulcair in Outremont in 2007.

This morning’s breakfast was resolutely low-key. Pratte sat in a plush chair and interrogated the three candidates, gently gently, in turn. They did not appear together except for a group photo. Let’s take them in the order they appeared.

I was excited when Philippe Couillard, the urbane former health minister who’s this race’s pretty clear front-runner, penned an op-ed in Le Devoir last month featuring some bracing pro-Canada rhetoric. It wasn’t entirely clear to me that this Captain Canada act would last, especially since Couillard’s article was edited after publication to add a mention of Claude Ryan, the party’s patron saint of constitutional ambivalence. But Couillard did answer Pratte’s questions this morning with a fair dose of unabashed pro-Canada rhetoric. He called federalism “a mode of government that the world envies us” and said “it’s there” — in the hearts of Quebecers, he meant — “the pride of belonging to a great country.”

A little dancing followed promptly. Couillard made haste to add the “Quebec ma patrie, Canada mon pays” line that Michael Ignatieff used to favour, and then got stuck in snow drifts three fight high as he tried to explain his constitutional policy. “This conversation” — about the Quebec legislature’s refusal to endorse the 1982 constitutional amendments — “isn’t over for us.” He did allow that “1982 was an important advance for Canada,” because it permitted a repatriated constitution and a Charter of Rights, which he did not depict as a corresponding setback for Quebec, but he said the events of 1982 constitute “un malentendu,” a misunderstanding between Quebec and the rest of the country. More broadly, he sees events since 1976 — the election of René Lévesque, the first referendum, the repatriation, Meech, Charlottetown — as “an immense cycle of history that hasn’t been closed.” It became easier to understand how Benoît Pelletier, Charest’s first-term intergovernmental-affairs minister and a relative constitutional hawk in the Claude Ryan mode, wound up on the list of Couillard’s supporters.

But neither does Couillard want to lurch immediately into formal constitutional negotiations if he becomes leader and the Liberals manage to take power back from Pauline Marois’s PQ. “Let’s not fall into the trap of an interminable list of demands, of a grocery list,” he said. He even had a kind word for Canada’s constitutional monarchy: “I find it rather romantic.”

Pierre Moreau was completely unknown to me. I see from his bio it’s because, although he was first elected in 2003, the lawyer lost his seat in the 2007 election and didn’t hold a cabinet post until he won it back in 2008 and became chief government whip. In 2011 he became intergovernmental-affairs minister, which is a bit of a Maytag Repairman role since Stephen Harper keeps his own intergovernmental-affairs ministers drugged and gagged in the broom closet. Finally, on his way to forced retirement, Charest made Moreau his transport minister. The guy was clearly on an upward trajectory, but he’s the least known man in the field.

I liked him immediately. He’s a journeyman, not given to rhetorical flights and apparently uninterested in combing his shock of black hair. But he seems strikingly at ease with himself, genuinely funny. He proclaimed himself, as he took his seat, someone who’s “always been federalist.” The contrast was with Raymond Bachand, whom we’ll get to. Moreau is positioning himself in this race as the unabashed federalist. A new round of constitutional talks? “It would take two to negotiate,” he pointed out. Having a list of demands is just trouble, he said: “it just becomes a tool for our adversaries.” “We shouldn’t make ourselves believe we’ll attract francophone votes by playing up nationalism,” he said. “We mustn’t be a copy of the PQ. When you offer people a copy they throw the copy out and keep the original.”

So Ottawa can roll right over this guy. Except not quite: he’s fixated on the Senate, “a fundamental element of balance in Canada,” and if any of Stephen Harper’s reform plans — here, Moreau was making the perhaps reckless assumption that Harper still has any reform plans — reduce Quebec’s weight in central decision-making, “it would be unacceptable.” Moreau said a court challenge should be an option if such a plan takes shape.

That’s Raymond Bachand, who was Charest’s finance minister before the fall but who started out as a Péquiste alongside René Lévesque and then as chief of staff to Pierre Marc Johnson. Then he left politics to get rich, returning only in 2005 as a surprise addition to the Charest Liberals. Pratte wasted no time: Hey, how do you go from Péquiste to Liberal leadership candidate?

Bachand’s answer had some edge to it. “There may be people who never ask themselves the question” of Quebec’s place in Canada, he said, glaring out at the table where Couillard and Moreau sat, “because they never push back against an injustice.”

Remember what Quebec was like in 1970, he said. He was told to “speak white” (an archaic anglo insult aimed at French speakers) in retail stores. Senior management positions were closed to francophones. “But look at the lightning progress we’ve made since then,” he said. “And it’s the same constitution, fundamentally, now as then.”

I’ve got a long history of mistrusting sovereignist converts to federalism because very often it’s hard to get a credible explanation for either stance out of them. This is the Nycole Turmel/ Jean Lapierre line: I couldn’t tell you why I seemed to be sovereignist. Life’s full of mystery! And as for now, well, folks change, am I right? Bachand manages to sound convincing about his past and his present. He took care to quote John Parisella, Robert Bourassa’s former chief of staff, who is not endorsing a candidate but who said Bachand represents the Liberals’ future because he can get voters who aren’t federalists yet. Bachand’s selling proposition is that he represents higher risk but also higher reward than the other candidates.

He sat with a cushion behind his butt because he’s clearly built to slouch and wanted to make sure that reflex didn’t win. He’s visibly the oldest candidate, rumpled and colloquial. I found myself thinking of Lévesque as I listened to him, as Moreau had reminded me of Charest and Couillard, I’m afraid, made me think of André Boisclair, the young former PQ leader who had a lot of qualities but didn’t inspire the comfort that closes the deal with voters.

Bachand consulted written notes as he argued that natural resource development won’t get Quebec out of equalization. “We’d need $14 billion a year. Alberta gets $12 billion. It’s an illusion.” That was a shot at Moreau. Then a shot at Couillard’s plan to put an end to a vast historical cycle. “Where do you want to put your energy? I don’t want to close a cycle, I want to build a future.”

In La Presse, after a league-sanctioned debate on Sunday, Vincent Marissal called this crop a bunch of weaklings because they don’t have a list of constitutional demands. The winner of this contest will spend the entirety of his tenure being called the same and worse by his adversaries. What these three have to their advantage, Moreau less than the other two, is an easy familiarity with the business of government. It gives them a confidence that you don’t find in the current federal Liberal leadership candidates, most of whom have no experience in the federal government.

I arrived thinking Couillard was the most, indeed probably the only, interesting candidate. I left with a lower opinion of him and a higher opinion of his opponents. And a sense of overriding strangeness: these three are comfortable with a more strongly federalist discourse than any Quebec Liberal leader in decades, yet none knows the rest of Canada well, and the rest of Canada knows them hardly at all.

Link to original article from Macleans.ca