Survey: Quebec after the September 4 elections 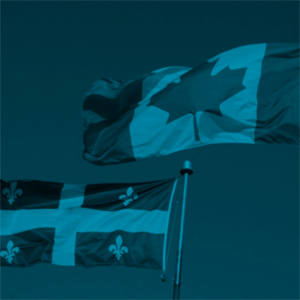 ANNUAL SURVEY BY
THE FEDERAL IDEA:
QUEBEC AFTER THE SEPTEMBER 4 ELECTIONS

Montreal, Wednesday, November 14, 2012 – According to 86% of Quebecers, the result of the September 4 general election in Quebec is due to a desire for a change government, while only 8% believe that voters wanted the elected government to work for sovereignty. A majority of Quebecers also agree that the Quebec Government’s and the federal government’s main priorities should be, in order of importance, the economy, job creation and reducing government spending. Repatriation of powers and the national unity issue are well back in respondents’ choices. Moreover, in the current climate of uncertainty about the global economy, Quebec’s membership in Canada is seen as an advantage by 83% of Quebecers.

These are some of the findings emerging from the fourth annual CROP poll commissioned by the Federal Idea, a Quebec think tank on federalism founded in 2009. The opinion poll was conducted between October 17 and 22 with a WEB panel composed of 1000 respondents. As in previous surveys, the Federal Idea sought to measure Quebecers’ changing perceptions of issues relating to the Canadian federation.

According to the survey, the arrival of a government committed to sovereignty does not prevent 66% of Quebecers from considering the sovereignty debate a thing of the past. 34% of them regard the debate as more relevant than ever.

Other results from this survey are as follows:

When asked about a statement by the Prime Minister Pauline Marois to the effect that remaining a province in Canada represents an unacceptable risk for Quebec, 65% of respondents disagreed with this view, while 27% supported it.

The survey also shows that the Quebec government’s stated intention to seek new powers, particularly in the areas of culture and employment insurance, meets with little enthusiasm. In fact, only 43% of respondents express support for repatriation of the employment insurance program, while 45% say they agree that the federal government should cede all its cultural support programs to Quebec. On this point, the results appear consistent with the fact that a majority of survey respondents want their governments to give priority to the economy and not drag them into new constitutional wrangling.

The study also reveals that 39% of Quebecers believe that in recent years Quebec has not been as close to the rest of Canada as it was before. Only 9% of respondents feel that Quebec and Canada have grown closer, while 53% think that the two are neither closer nor farther apart.

Lastly, respondents to the Federal Idea survey were asked to comment on the major strategic issue of oil, an economic factor of primary importance for both Quebecers and other Canadians. The survey reveals that while 47% of Quebecers do not look favourably on the export of oil from Alberta to Asia via a pipeline through British Columbia, 74% are, nevertheless, in favour of shipping this resource from Alberta to Quebec by pipeline.

For additional details on the most recent survey by the Federal Idea, please contact the Executive Director, Mr. Jocelyn Coulon, at the following telephone number: (514) 951-0431.

The Federal Idea is a non-partisan think tank whose purpose is to foster quality discussion of all aspects of federalism through research, surveys and public activities. All studies and research published by the Federal Idea, including this new survey, can be found on its website at the following address: www.federalidea.ca